A revered hermit in the Hinterlands of Africa, Dolores has allied herself with Heidern. Her psychic medium capabilities allow her to contact the spirits of the earth, and she uses holy soil to combat her foes. Apparently one of the many resurrected through Verse, Dolores may hold the key to its secret, however her connection to it remains a mystery.

With the power of the Holy Soil, Dolores can control mud and rocks, being able to change its state and reshape it at will. During some of her moves, the earth spirit can be seen emerging from with the mud puddles.

Dolores utilizes her ground-based powers in various ways, such as for teleportation, set-up moves and trapping her opponents, as well as being able to generate solid rocks in the form of stalagmites and boulders to crush the opponent. 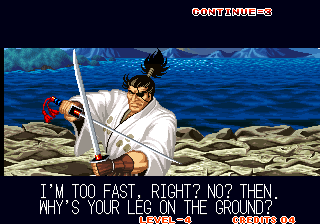